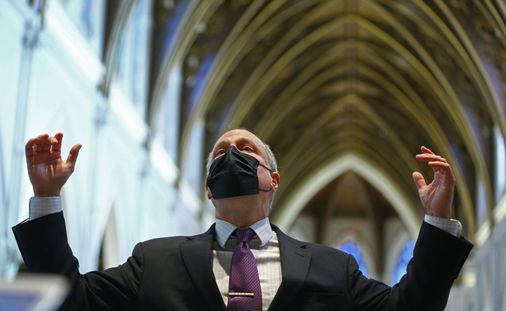 “Let’s not be afraid to be strong when you come in here,” he told his 20-member choir, rehearsing for his performance on the second Sunday of Advent Mass.

“Charming”, he finally pronounces a few moments before the start of services. “You guys feel this very well. “

Very kindly? Call him a master of understatement.

The seasonal music he and his choir are making this Sunday morning is more than just enjoyable. Agitation is one way of putting it. Profound is another.

And in this pandemic season, when masks are mandatory and fear floats invisibly in the air, there is something else informing the sounds coming from Clark’s choir.

“I’m actually older than everyone here – to be frank,” said Taras Leschishin, 64, Ukrainian and head of the choir’s bass section. “So I have worked with many conductors and I find that Richard brings musical expertise but also patient and charitable joy.

“He’s kind and gentle. It is demanding. But not in a derogatory way or in a way that makes you nervous about producing. He has a lighthearted way of getting the best of us.

It is no small feat these days when, even in this season of light and hope, there are medical bulletins and death tolls. And celebrations decidedly muted in the midst of all these songs of great joy.

That’s what Clark’s boss hears when he celebrates mass in the sanctuary far below Clark’s post in the choir of 146-year-old Puddingstone Church on Washington Street.

“We are very lucky to have Richard Clark. It is truly a ministry. And it’s an act of faith and worship for him.

It is also the culmination of a long journey that began in Greenwich Village in New York and his childhood on Long Island.

“I was 8 or 9 years old when I said to myself, ‘Being a church musician has to be the lowest musical aspiration possible.’ I was a little frustrated, ”said Clark, now 52. “I didn’t realize the richness of the church’s history. It is a cornerstone of Western music. The irony is that I had a career in church music. And we are here today. “

His compositions have been performed on four continents. He has given recitals in Belgium, Italy and France. He was elected to the National Music Honor Society.

He lives in Milton with his wife and four children. And, this Sunday, he reminds his choir to shift their breathing, as his 7-year-old red-haired son, Sean, sits in a chair to his father’s right at the organ.

And then it is time for Monsignor Kevin O’Leary, rector of the cathedral, to read the Gospel according to Saint Luke and to preach on the return of God.

“What did Jesus see in us that he would become like us? O’Leary asked during his Sunday homily.

He later called Clark’s music and choir uplifting, spiritual – an essential ingredient in celebrating the season.

“Richard has the energy and the knowledge and he has a charismatic way with his singers,” O’Leary, my former pastor in Scituate, told me after mass. “They feel part of this effort.

As the choir gathered at the cathedral on Sunday, its members wore coats and ties, down jackets and colorful sweaters and vests. The masks they wore did little to diminish the power of their singing.

On the bank of the Jordan the cry of the Baptist

Announce that the Lord is near

Wake up and listen as it brings

Good news from the King of kings

O’Leary incense the altar. Clark nods in prayer during the canon and the reading of the Mysteries of the Faith.

And, later, the choir talks about the music, its director and a Christmas season like no other.

“It’s rare to find someone who truly embodies all the things you want or need in a music director,” said Jaime Korkos, a 38-year-old mezzo-soprano from Hopkinton. “A lot of times they’re a little too self-centered or they don’t have any patience.

“But Richard happens to be really good at everything. He’s an extraordinary organist, but he’s also a composer. And what he writes isn’t just your kind of cool basic stuff. He writes really interesting music. And it’s really fun to sing.

This pleasure – this music – echoed on the walls of the majestic and beautiful cathedral. The congregation may have been thinned by worries about the pandemic, but the spirit of Christmas is alive in its pews.

“His talent brings the joy of music to everyone, whether you are an amateur or a professional,” said Michael Gonzalez, 28, of Fall River, who had performed at the cathedral under the direction of the former music director, Leo Abbott, and is now back in the choir attic.

“It is a pleasure to come here every week and make great music. And because of that, it’s obvious. Why not come back every week?

It’s a good question. And it is the choir that responds in song.

A choir whose members know that now, perhaps more than ever, there is a moving need for the kind of music Clark makes them sing every Sunday.

“I tell my parents and friends that I am one of the luckiest people in the world because during the whole pandemic I think there were only three weekends, maybe four, that I didn’t sing, ”Clark said.

“I feel a great joy that I can bring my own talents together with other singers to produce the best kind of music possible so that people can’t feel like the world has stopped. It was the greatest thing.

This is all under the direction of Richard Clark, whose son Sean, a second year student at Saint Agatha School in Milton, came up with this simple assessment of his father’s Christmas music:

“I don’t know how to explain what I like about it,” the little boy said, smiling shyly. “But I love this.”

To which his father’s slender choir would gladly sing in unison this heavenly response: “Amen.”

Thomas Farragher is a columnist for The Globe. He can be contacted at thomas.farragher@globe.com.