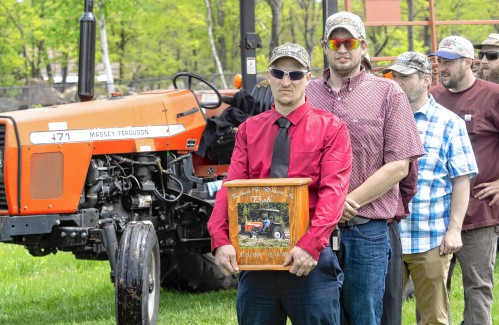 The tractor looked small at first, a small figure 100 yards away, climbing a steep hill on Route 127 on Sunday in Webster.

Eventually, the distant hum grew louder, the vision widened, revealing a giant two-wheeled machine, driven by one of the patriarch’s grandsons. A wooden box – a homemade urn built by a son-in-law – rested between the driver’s feet.

The tractor, used for decades by Robert Drown Sr. at Drown Farm, pulled a hay wagon the size of Rhode Island. Drown’s other five porters, part of the king-size stable of 12 grandchildren and 26 great-grandchildren, stood on either side of the wagon.

They buried the urn a mile away, in Corser Hill Cemetery, in a square opening dug by – you guessed it – two other grandsons.

It represented closure for the family. Drown Sr. died five months ago at the age of 88. Late spring has been targeted for the burial of his ashes, for a man who started small as that distant tractor on Route 127 and then became an undeniable buzz within the farming community.

Call it a changing of the guard.

“The challenge now for everyone is to find qualified help,” said Beth Silver, 51, the youngest of Drown’s four daughters and the new boss. “Not so much school children, but people who can be around animals and handle them in a safe and humane way. But the cost of everything is increasing and it is difficult to operate the farm. »

It meant keeping the emotions close to his jacket. That meant snagging a 12-hour workday and establishing a strict code of conduct for her children. More than one family member said Drown’s motto was “No work, no food, no sleepiness.”

“He used to tell all the grandkids and their friends,” Silver said. “If you don’t help, you don’t eat here and sleep here. You have to work a little. »

Unfortunately, Yankee Farmer sometimes refers to a stubborn streak, and that’s what Drown showed after doctors found spots on his liver in 2014.

He declined further testing. He lived with cancer for eight years. “He never knew it was cancerous,” his wife Kay said. “A mass was discovered and he chose not to do a biopsy. He said he didn’t want it to spread.

It made no sense, of course. But it was Drown’s method of rationalizing his resistance to full diagnosis and then treatment.

However, its shell was not always hard. He took his workers to Newick’s Lobster House to say thank you. He took his family out for ice cream and fishing. He and Kay went dancing together.

Meanwhile, Drown’s raw exterior paid off in the long run. His dairy farm had 16 cows when he bought it 66 years ago. It now has 200 cows. And 52 acres of land.

He married three years before the birth of the farm. He and Kay met at Warner’s Simonds Free High School. She said the farm kept her “very busy”.

Kay used a walker to navigate the house adjacent to the farm at 1345 Battle St. She was pleasant and direct, never saying much, never losing words.

Once upon a time, Kay got up at 3 a.m. to milk the cows. In fact, that’s how Drown raised his five children. To work. Before school. Then after too.

No one knows more than Silver what it will take to keep the farm afloat. She listed what needed to be done, the daily tasks: milking, planting, working the crops, haymaking, feeding the cattle, transporting the manure and maintaining the equipment.

“I don’t like clutter,” Silver said. “Not everyone is like that and it makes it difficult sometimes, but my dad always wanted it to be a centerpiece.”

Silver became emotional when she said, “I told him I would try.”

She’s been helping her father on the farm for decades, once juggling school and words before recently taking charge and leading the way into the future.

These days, she gets up at 3 am to milk the cows and look after 80 head of cattle. Then she heads to her other full-time job, as an administrative assistant at Webster Elementary School.

Then she comes home to clean up and go back to the farm. She has one full-time employee and will need more. His father has already laid the groundwork to hone his time management skills.

In one way or another, Drown served on the Webster Board of Selectmen, the Town Hall Building Committee, and the Landfill Committee. He also worked for the city’s fire and police departments. He served on the board of the Merrimack County Farm Bureau and advocated for other farmers.

“He worked the field here until October and he passed away in December,” said Bev Clark, another of Drown’s four daughters. “He had regular pain, but he was on the pitch and he was still going strong, and he wanted the farm to continue, so that’s what the family hopes to achieve.”

But first, there was an unfinished family business to finish: a formal farewell to mark the respect Drown had earned.

His grandchildren’s fingerprints were everywhere. They built the urn, a small wooden box resembling an urn. They brought it to the cemetery, with Bodi Silver, the youngest grandson, driving the tractor and securing the urn between his feet.

The other five porters emerged from the back of the hay wagon, then lined up in single file. Robert Drown III was in front, holding the urn. They walked to the grave and presented the urn for burial.

Kay sat up front on the first day of real heat and humidity this spring. Reverend Dave Richardson of the First Congregational Church of Webster presided over the funeral.

More than 100 people took part. Then the tractor rolled down the hill, returning to the farm.

“There’s a lot of work to do,” Silver said. “It’s hard without him, but I’ll try to keep him alive.”