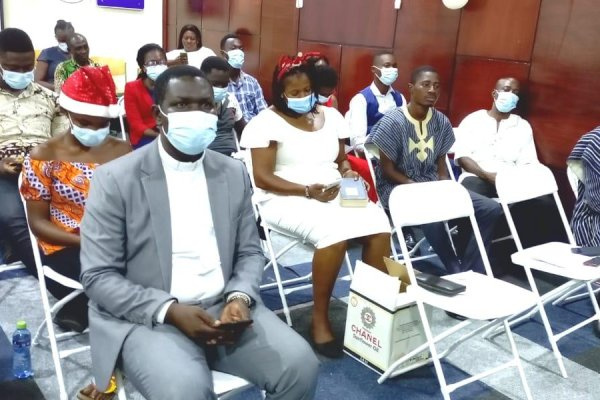 Some dignitaries at the event

The Western Regional Office of the Food and Drugs Authority (FDA) hosted a nine lesson and carol service to mark this year’s Christmas celebration.

He said that although 2021 has been a difficult year for the Authority due to the outbreak of the COVID-19 pandemic, God has been good to them as the target for the year was about 95% achieved.

Addressing some of the achievements of the year under review, he said, the year 2021 started with the plan to move the office to a convenient location, which was achieved in no time.

He has also trained more than 400 herbalists in basic Good Manufacturing Practices (GMP) in the hope of bringing them into compliance.

The Branch has also been able to train nearly 100 packaged water manufacturers to improve their production while public education programs and market surveillance have resulted in reduced sales of unhealthy products in the market.

He added that their efforts have resulted in an increase in voluntary submissions of applications for the safe disposal of damaged and unhealthy products, as a result of the intensive public education he has undertaken.

It has also secured offices in Sefwi-Wiawso in the North West region, hoping to be operational by the first quarter of 2022.

Mr. Sumaila attributed the success to the hard work, dedicated service and teamwork shown by the staff.

He expressed hope that staff would maintain and improve it until 2022.

Mr. Sumaila commended the staff for their efforts and further commended all stakeholders, especially the media, for supporting the Authority in conducting its activities in the regions.

However, he said a sample of palm oil in the market revealed that some traders were selling adulterated “Sudan dye”, which was a setback for the Authority as it was unfamiliar with the area.

He pointed out that if the practice continued, the Authority would have no choice but to blacklist the market in question to deter people from buying there, which might not bode well for them. tradespeople.

The regional chief announced that from next year his office would focus on selling food on the streets, even though that had been the mandate of the district assemblies.

He said his office would work with the assemblies to issue street food licenses for public safety.

The Rev. Seth Williams, regional accountant for the FDA, and also chief pastor of the Methodist Church of Nazareth, Nkotompo, in a brief exhortation, said the gathering was a reminder of God’s gift of love to the world for the hello divine.

He noted that “Fornication, corruption and social vices have taken center stage in Ghanaian society and elsewhere, if Ghanaians celebrate the birth of Christ then they should remember that Christ was born for may the world be reconciled to God, “

“As we celebrate Christmas, we need to remember that Christ can come at any time or we can even lose our lives.

“Therefore, we must strive to live a godly life by accepting the gift of God, which is Christ in our lives,” said Reverend Williams.