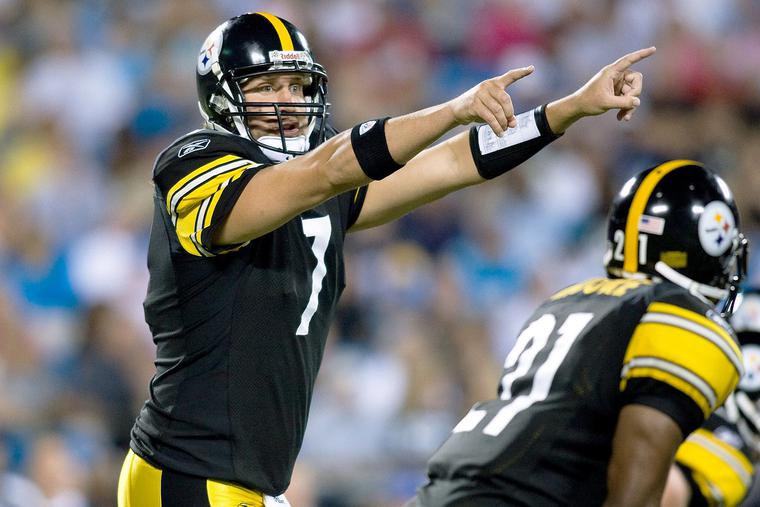 Pittsburgh Steelers quarterback Ben Roethlisberger has finally left, a few years after having to retire. It’s the offseason, but with the draft coming up this week and the team scouting for free agents — and getting a new quarterback, who may or may not be good enough — fans of the Steelers started talking about the team again.

They expect the team to win big because they were winning big. They still win, but not so big. As a Giants fan since I was a kid, I would be very happy if the Giants did as well as the Steelers, but the fans here expect success. The team has let them down in recent seasons, but they are still hopeful. There’s a lesson for the Church here, in the way Steelers fans react to their team.

As illustrated by the game against the Bengals in Cincinnati last season. The Steelers had won four and lost two. Fans back home, where I go to watch the games, were encouraged but wary. They didn’t think old Roethlisberger had it in him. They weren’t sure about the coach. Most of them expected certain key players to underperform. But they hoped.

The Steelers lost, 41-10. The team’s only touchdown didn’t matter. He came on in the final three minutes against the other team’s second and third strings. The Steelers really lost to the Bengals 41-3. They were completely humiliated.

Our home spot was filled by about a fifth, which was more than any Steelers game so far this season. In previous years, even the season before when people were more worried about COVID-19, it was packed for Steelers games, often standing only. Many came in Steelers jerseys and Steelers knit hats (an outfit often seen at mass in the fall, with the vestments of one religion worn in service of another).

People clapped together and moaned or swore together. It was a community event, of people coming together in a shared love for their local team. They may not know each other in real life, they may not talk to each other outside the bar, but when the Steelers play, they become brothers in arms. Even I, who after three decades here am still a bit of an outsider, can feel it.

But last season, feeling so skeptical about their team’s chances, many of these people stayed away. They probably watched at home, but they didn’t wake up to participate in the public event.

This is the first lesson for the Church: once committed, people keep their loyalties but they don’t always hold them tightly. Identity is something to rely on. But without counting. The challenge for the Church is that the more loyalty costs, the more easily people get rid of it. Being Catholic easily passes from a practice to an identity. At a dinner party in New York a few years ago, the waitress happily told us that she was a Catholic from Croatia. My friend asked where she was going to mass. She looked, and I’m not exaggerating, shocked. “I’m not religious,” she says.

The Bengals led 10-3 after the first quarter, and you could feel the nervousness. “It’s going to be tough,” a man near me said, and heads nodded. Then the the wheels started to come off. The Bengals scored three touchdowns in the second quarter to take a 31-3 halftime lead.

The spirit of resignation had already set in, five minutes from the end of the first half. Except for a few sacks and a long pass, the Steelers were completely outplayed. Fans went from hope to amused resignation. The people who had shouted rude words at the Steelers errors said nothing. People who had been glued to TV weren’t. Some started looking at their phones or talking to their neighbors. Some paid their bill and went home.

Here is the second lesson for the church: community enterprises, even among the faithful, depend on some degree of success, even if success is simply avoiding complete failure. People who hold their loyalties tight may stay loyal, but they don’t stay committed. They have other things to do, things that won’t disappoint them the way the Steelers do. If Catholics don’t see the Church doing anything in the world, they can still go to Mass on Sundays, most of the time, and do little else. They still love God and his Church, but they have other ways of loving him than those of the Church.

Later in the game, the silent, depressed, and disengaged bar burst when the Steelers, after giving up yards that would inevitably lead to another Bengals touchdown, intercepted a pass near the goal line. The few people still watching started clapping and everyone looked up and clapped as well. The spirits rose.

Finally, success. Not much success, but something. Maybe, just maybe, maybe, the Steelers could stage one of their big comebacks, which fans remembered from the good old days when Roethlisberger was younger and better. People put down their phones and stared at TV screens.

The bar then burst into curses when on the next play, Roethlisberger threw a sloppy interception which the Bengals returned for another touchdown. The joy had lasted maybe 45 seconds. Almost everyone went back to their phone and their conversation. Even some of the people who were still watching the game gave up.

Here is the third lesson for the Church: Excellence can awaken the apathetic, but you must do something about it. A success must promise more success and then deliver. The Church must be a living force in the world. Church leaders love big events, gatherings, programs with names like “The Living Church!” but whatever excitement they create, it doesn’t seem to last. It fades or is wiped out by a new story about clergy abuse or some other scandal.

After that game, the Steelers were going 5-4-1 and barely making the playoffs. Fans hoped again, but the Chiefs crushed them in Game 1 of the playoffs, 42-21. My friends from Pittsburgh ended the season feeling like their team was getting worse. But it’s a new season and be faithful, they hope. Like the Catholics.