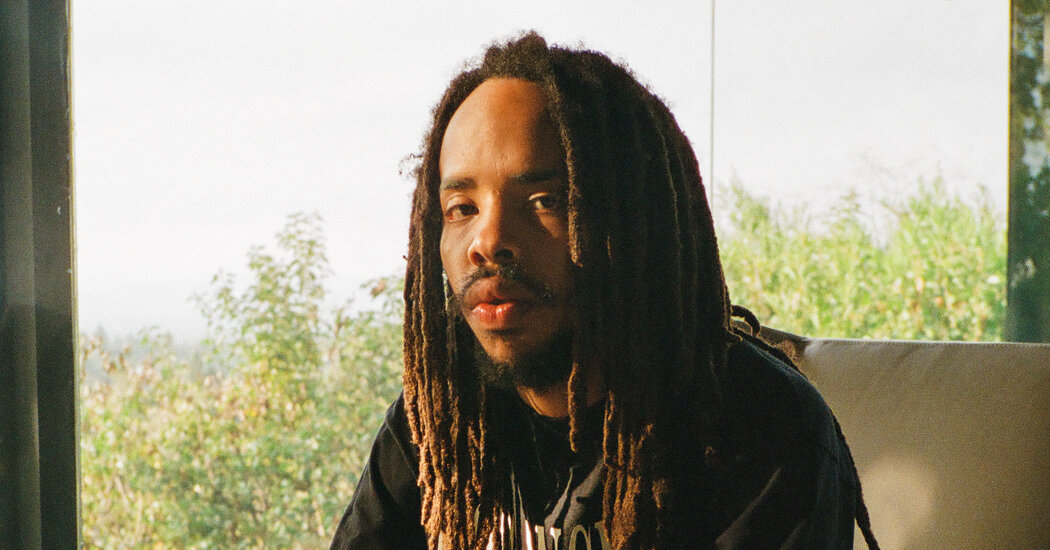 In 2010, Earl Sweatshirt released his first mixtape, “Earl,” and his new song titled For This Time shows just how far he’s grown while still retaining his wisely iconoclastic spirit. Earl’s most recent releases – “Some Rap Songs” of 2018; ‘Feet of Clay’ of 2019 – represented his music at its most avant-garde, moving through murky, collage-like atmospheres in a constant state of transformation. “2010”, however, is more straightforward and sustained, with a low-key rhythm from producer Black Noise that allows Earl to lock into a hypnotic flow. The succinct poetic imagery (“crescent moon wink, when I blinked it was gone”) and the clear and strangely satisfying confession (“walking outside, it was always beautiful”) flow from him as regularly as tap water. LINDSAY ZOLADZ

FKA twigs with Central Cee, ‘Measure of a man’

This song’s distinctive top-down chord progression, dramatic swells, and even lyrics – “the measure of a hero is the measure of a man” – could make it a James Bond theme. It’s a sign of FKA twigs’ primary ambitions, of her willingness to engage in the carnal sense and idealism, and how carefully she assesses the gradations of her voice in each sentence. JON PARELES

Call it a meetup: “You taught me ‘Nine Stories’ while you played mine,” sings Australian-born California musician Hazel English at the start of her ode to JD Salinger’s favorite book for all artistic teens. . The track is a three-minute dream-pop reverie, obscuring the rather ironic lyrics for a Belle & Sebastian song under a whirlwind of tinkling guitars and timidly whispered vocals. It’s also kind of an act of nostalgia, to find the 30-year-old evoking the sounds and memories of her high school years: “Now that I’m falling, I can’t ignore it,” sings it. -she softly, sounding as blissfully crushed as a teenager. ZOLADZ

The young Chicago trio Horsegirl is proof that the shaggy spirit of Gen X indie rock is alive and well in a certain subset of Gen Z. The layered voices of Nora Cheng and Penelope Lowenstein are buried under a dissonant avalanche. of “Daydream Nation” -esque guitars, but enough lyrical images surface to create an eerily poetic impression of their lead character on this standalone single, their first release since signing to Matador Records. “He washes his robes to prepare for being crucified,” Cheng intones, while Lowenstein’s more melodic vocal line adds extra texture to the song’s enveloping and shoegaze atmosphere. ZOLADZ

Ben LaMar Gay with Ayanna Woods, ‘Touch. Do not scroll ‘

On “Touch. Don’t Scroll, ”sing Ben LaMar Gay and Ayanna Woods, two Chicago musical polymaths, who try to stay connected to each other in an overcorrected world. “Now baby I’ll never leave you alone / Oh can you hear me or are you on the phone?” They buzz in unison, one octave apart, to a syncopated rhythm and slightly sparkling electronics. The track is nestled at the heart of “Open Arms to Open Us”, Gay’s latest album and possibly his most engaging, bringing together influences from country blues, Afro-Brazilian percussion, Chicago puckish free jazz and indie rock from the United States. 2000s. GIOVANNI RUSSONELLO

“Bet It,” from the soundtrack to Halle Berry’s first film, “Bruised,” is just Cardi B’s second solo single released this year. And while it’s nowhere near as fun or inspired as that previous hit, “Up,” “Bet It” feels more like an update to the bragging status on Cardi’s recent past, taking into account her victories. at the Grammy and her memorable appearance at the Met Gala in a dress with a “tail so long it drags 30 minutes after.” ZOLADZ

An incredibly feverish turn from Morray, whose 2020 single “Quicksand” leaned towards the spiritual. Here, however, he’s fierce, rapping with a hoarse cry and a sense of defiance. He is joined by Benny the Butcher, who is one of hip-hop’s quietest swaggers. An unexpected pairing and unexpectedly effective. JON CARAMANICA

Producer Frank Dukes – who has done melodic and haunting work with Frank Ocean, The Weeknd, Rihanna and many more – releases “The Way of Ging”, his first project under his own name. It’s a beat album – a bunch of beats, as they used to say – that is available for a limited time online, and will eventually be removed from the internet and only available as an NFT ensemble. “Likkle Prince” channels early 80’s electro with a bit of majestic disco. It’s scary and propulsive. CARAMANIC

underlines “Everyone is dead!”

A catchy and trippy explosion of hyperpop mayhem, “Everybody’s Dead! Is a new single from underscores, who released earlier this year “Fishmonger”, an excellent, scrappy and puckish debut album. CARAMANIC

Leon Bridges looks back at the soul of Sam Cooke; Jazmine Sullivan can return to bebop scat vocals. They exchange verses on a slow-motion beat and rhythm guitar in “Summer Rain” to evoke endless marital bliss, urging each other “don’t stop now”, for less minutes of suspended time meant to play in. loop. PARÉLES

Ibeyi with Pa Salieu, ‘Made of Gold’

Ibeyi’s music has always harnessed the sense of ancestral knowledge: French Afro-Cuban twins grew up listening to Yoruba folk songs that channeled the minds of slaves brought to the Caribbean during the Middle Passage. But their new single, “Made of Gold”, starring British Ghanaian rapper Pa Salieu, swaps the simple yet powerful piano and cajón for another heavenly and spectral world. By eliminating references to Yoruba deities Shango and Yemaya, as well as Frida Kahlo and the ancient Egyptian “Book of the Dead”, the duo invoke the power of intergenerational sources to protect them. “Oh you with a spine, that would work your mouth against my magic,” they intone. “It was transmitted online uninterrupted. »HERRERA

Sting’s new album, “The Bridge,” is often reminiscent of the jazz-folk-Celtic-pop hybrids he forged on his first solo albums in the 1980s; one song, “Harmony Road,” even features a saxophone solo by Branford Marsalis, which was central to “The Dream of the Blue Turtles” in 1985. Many new songs lean towards parable and metaphor, but not “Loving You “, the confrontation of a husband with the unfaithful wife he still loves:” We have made a vow inside the church to forgive the sins of others, “he sings. “But there are things I have to endure like the smell of another man’s skin.” Written with British electronic musician Maya Jane Coles, the track is confined to two chords and a brittle beat, punctuated by distant arpeggios and sounds that emerge as unwanted memories; it’s memorably dark. PARÉLES

With patient arpeggios and calming bass notes, harpist and songwriter Mary Lattimore builds a grand, meditative edifice behind Chelsey Coy, the songwriter and singer at the heart of Single Girl, Married Girl, in “Scared to Move.” It’s from the new album “Three Generations of Leaving”. Cale’s multitrack harmonies promise, “In a strange new twilight, I will be your guide” as Lattimore’s harp patterns build a scintillating path forward. PARÉLES

“Deciphering the Message”, Makaya McCraven’s debut LP for Blue Note Records, might easily remind you of “Shades of Blue”, Madlib’s classic 2003 album remixing old tracks from that label’s jazz archives. On “Deciphering,” McCraven – drummer, producer and rhythm dissector – digs through 13 tracks from the label’s catalog and attacks them with his personal method of remixing and pastiche. “Deciphering” crackles with McCraven’s sound signatures: viscous vibe, still energetic drums, recognizable sounds from his longtime collaborators (Marquis Hill on trumpet, Matt Gold on guitar, Joel Ross on vibraphone, et al). “Tranquility” comes from a track by vibraphonist Bobby Hutcherson from his 1966 album “Components”, and McCraven’s intervention is on two fronts: but his own drums – kinetic, relentless – keep the energy boiling. RUSSONELLO