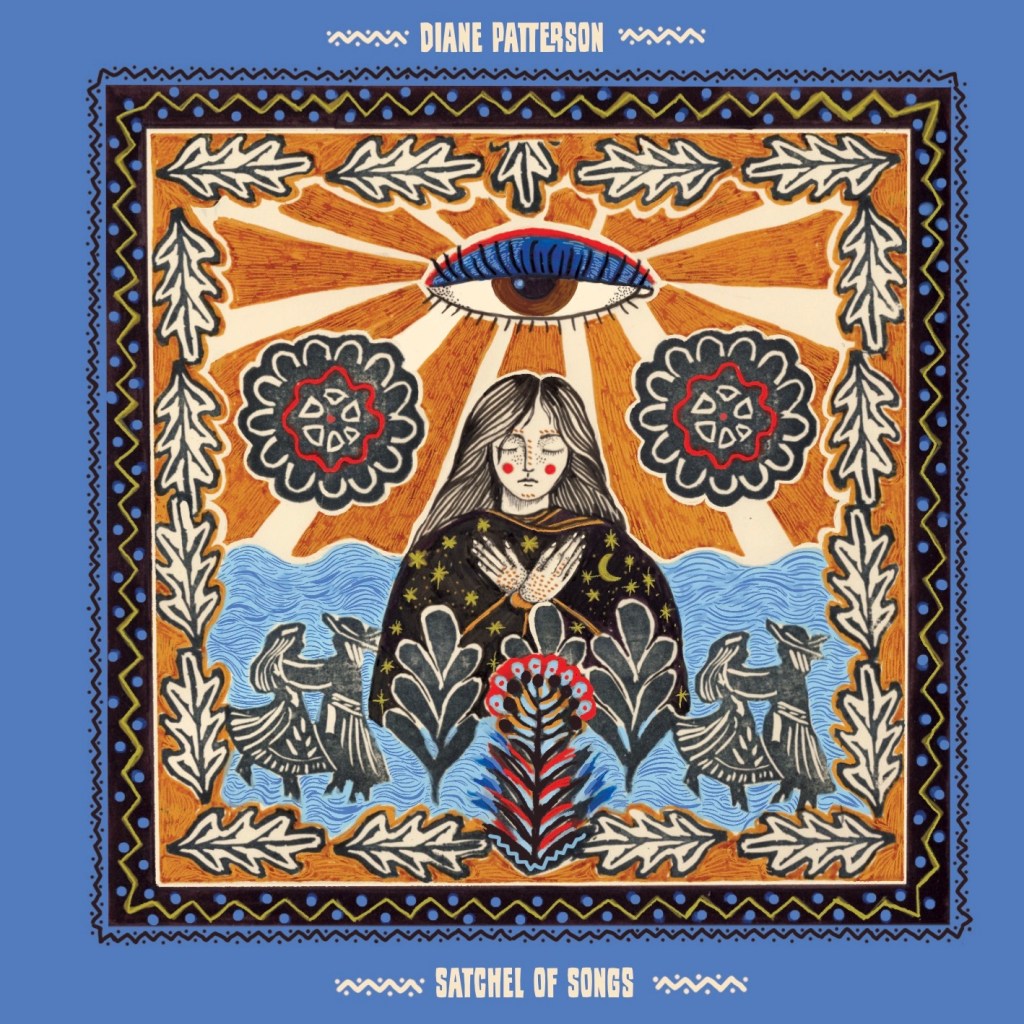 Diane Patterson’s new album – “Satchel of Songs” – will be released on March 8, International Women’s Day. It is her sixth studio album and continues her celebration of life and respect for Indigenous cultures and includes guest appearances by singers Ani DiFranco and Alice DiMicele and kora player Gordon Hellegers. In the spring of 2019 Patterson toured with DiFranco and most recently they became neighbors in New Orleans.

Patterson was born in San Diego and raised in Red Bluff, which she describes as “a little shitkicker town in Northern California.” She went to UC Davis where she started playing music and later lived in Santa Cruz and Mendocino. Patterson has performed extensively in Sweden, Denmark and Germany and has another Scandinavian tour scheduled for April. The Sentinel recently spoke with Patterson about his Satchel of Songs.

Q: “Congratulations on the new album. Tell me about setting up this one.

A: “I recorded most of the album in New Orleans at the studio of Ani DiFranco and her husband Mike (Napolitano), and then we sent pieces to different people,” Patterson explained. “The initial base, other than me and my songs, was Todd (Sickafoose) and Terence (Higgins), Ani’s rhythm section. They played a lot on my ‘Open Road’ album. Todd (bass) soared d’Eugene and Terence (drums) lives here in New Orleans, so he’s been here a couple of times. He’s amazing! I’m so lucky to have him. He played in the family’s Dirty Dozen Brass Band Neville. He’s a super connected and respected drummer here. And he loves Ani, man. He said when he first heard Ani’s music, he was like, ‘How did you get this? concert? I would love to play with her. So, thanks to Ani, we know Terence.

A: “It’s really exciting to be here at the heart of so much music. My mom is actually from Louisiana so there’s kind of an ancestral feeling here as well. It’s really good,” Patterson said. “Our neighbor and friend Ani DiFranco planted a beautiful little magnolia right next to our house this morning. We’re right next to the big seawall. It’s kind of like being in town but we have this big place to play on grass and it’s quiet here. It’s pretty amazing.

Q: “I’ve always enjoyed the way your music points to life as sacred and all of the ongoing struggles to protect native cultures in places like Big Mountain and Standing Rock. »

A: “The title track — ‘Satchel of Songs’ — is a song of apology addressed to Indigenous peoples by the settlers,” Patterson explained. “An inspiration for this song was my good friend Sara Tone. She was playing her music at an event in Sacramento to raise money for Native activists who had been arrested at Standing Rock for trying to peacefully protect the water. She happened to be the only non-Indigenous person to perform and she publicly apologized to the Indigenous people on behalf of the settlers, for all the wrongs that had been done. I loved that use of the microphone;” Hey, you’re on the mic. What are you going to say? Are you going to make an echo that’s beautiful, that lasts for a while? Or will it just fade away?

“Then I went on tour to my beloved Sweden and met Elin Teilus, a Sami woman. She came to my show in Gothenburg and my partner Sheba said, “You should invite Elin to sing a song. Elin sings joik, a traditional Sami style of singing. It’s reminiscent of something you’d hear in the teepee here on Turtle Island, as it sounds like it’s straight out of the ground. And according to Elin, it is. She told me that she sits on the floor, puts her hand on the Earth, and songs start coming out of her. Elin sang beautiful joik and I sang my song “Esselen People”.

“So I said, ‘I want to apologize to the Sami people for the way they were treated, on behalf of the settlers. I am not Swedish, but a descendant of settlers. Elin received this apology so graciously and said, “My grandfather told me that he dreamed that the tears of his generation and the tears of our generation would come together and create a new era.” And she sang a song inspired by that,” Patterson explained. “It was a moment that really brought us together and I said, ‘I’m going to go home and write an apology song.’

“Around that time, a friend who is an Indigenous woman from the west coast of Canada wrote on Facebook, ‘We don’t want your apology. Apologies do nothing. We want you to participate in dismantling the structures you still benefit from! I thought, ‘Yes. And I’m still gonna do this song. I know an apology doesn’t do much, but it’s recognition, a place to start healing and stop perpetuating violence and racism. “, Patterson continued. “What do they say about artists? It is up to us to comfort those who are going through a difficult time and to make those who are too comfortable uncomfortable.

The elements do not judge

Q: “Your song ‘Maybe Easy’ is about how love and beauty co-exist with heartache and grief. And the song “Steady the Hand” is about child soldiers in Syria.

A: “’Steady the Hand’ is about a lot of things. Who can tell if a person is evil? Can I have some compassion for the way they behave? The song paints an image of war and mentions Aleppo and the crushing of ancient cultures,” Patterson said. “Also, there’s a nod to women who are going through a lot of violence in this world and saying, ‘If you’re going to say a prayer, and if you have a sister, can you say a prayer for her safety? ?

“The song returns to look at the Christian-sounding world that says, ‘If you get forgiveness from God so-called, then whatever you do is OK. That’s not my spirituality at all,” Patterson continued. “I see things differently. I spelled it poetically, ‘If no one taught you how to live / if no one taught you honor / if someone hurt you instead / just know you’re still done of earth / fire gives birth to your heart.’ The elements do not judge your life. They are my gods, but they are not judges. They don’t decide if what you are doing is right or wrong. It’s all up to you to fix things, to make a good echo of your life.

“That song – ‘Steady the Hand’ – was really relevant to the build-up to the Russian attack on Ukraine,” Patterson said. “I think Medea Benjamin may have grabbed the headlines saying, ‘People need to take a step back and pray about this.’ That’s exactly what my song says: ‘Reassure the hand that floats on the trigger / The war is so heavy / Can the people stand back and pray?’ »

Q: “Tell me about the song ‘Silk and Honest Pay’.”

A: “It’s a celebratory song. I think it’s my favorite. ‘Silk and Honest Pay’ represents the ancient May Day spring dance celebration,” says Patterson. “There’s a line, ‘I’ll meet you by the well. Imagine meeting someone at the Spring Festival one year and wanting to see them again the next. People come from all over, don’t they? There are no texts. So you say, “Next year I’ll meet you by the well. This song comes from my trips to Denmark a few summers ago. We were able to meet some wonderful women who had attended Viking reenactment fairs and they said, “There is that last line of an old Viking song that was sung by women; “I dreamed tonight of a dream of silk and an honest salary.” I loved it. I ran with it and wrote my own song with that line.

child of the commons

Q: “In the song ‘One Part Corn’ you talk about the commons. Tell me about it.”

A: “The song says; “I was a child of the commons. No one owned the land. The first time I really understood this idea of ​​the commons was when I read Starhawk’s Dreaming the Dark. In the appendix, she talks about how people were pushed out of the commons and lost their native plants and animals and ways of life, which were very integrated,” Patterson explained. “The Crown decided it was going to get super greedy and started exporting wool and it kicked people off the land. I go back to the great connected days before that, what it was like was to be on the commons Whites also have indigenous roots.

Listen to this interview with Diane Patterson at noon Thursday at noon on Transformation Highway with John Malkin on KZSC 88.1 FM / kzsc.org.