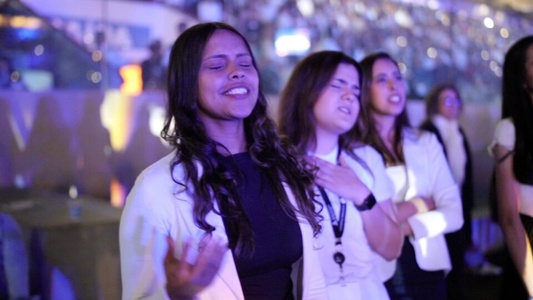 The Paulist Association (AP) of the Seventh-day Adventist Church, one of the administrative headquarters of the denomination in the state of São Paulo, celebrated its 100 years of history and achievements throughout the period : the growth of members, churches and educational institutions. To mark the moment, in partnership with other offices of the denomination in the capital, the communication network Novo Tempo and the Brazilian publishing house promoted the Adorers Mega Choir.

The event, which was also a worship service, aimed to achieve the record for the largest Christian choir in the world, surpassing the mark of 21,262 choir members. To do this, over the past few months, members and friends of the Adventist Church from across the state have been invited to join the choir. The big meeting took place on August 13, at the Arena Barueri, 30 kilometers from the city of São Paulo.

For Álisson Melo, musical producer of the event, the first challenge was to make thousands of people not only sing together but express the same emotion, harmony and intentionality. For this, vocal kits and online rehearsals have been prepared and made available to choristers who have registered for the mega choir in the period preceding the meeting.

Around the room, it was possible to observe, from the beginning of the afternoon, thousands of people in uniform, an aspect that characterizes a choir. At 5 p.m. sharp, the great service began. Inside the arena, 24,100 people were already gathered, and together they accompanied traditional music groups from the city of São Paulo, such as Project’Art and Nova Voz, as well as other guests, such as Prisma Brasil and two versions of the Arautos do Rei quartet: the current one and the one from 1995.

Pastor Cândido Gomes, Adventist youth leader for the entire state of São Paulo, was the speaker for the program. “Our message today is the deepest promise of the Word of God, which is the return of the Lord Jesus. Every time we come together like this, we get a taste of what heaven will be like. Today today we are going to open the Bible and [share] that Jesus is coming,” he said moments before addressing the audience.

Thousands of Voices, One God

“As I welcome these people here today, I hope that above all else God’s name will be glorified. But also that everyone’s faith is revived and that the Holy Spirit is poured out in the lives of our brothers and sisters. they praise God for everything that has been done in favor of his church and, above all, in our lives,” said Pastor Romualdo Larroca, president of the Paulista Association.

How it all began

It was in 1922. The city of São Paulo received, for the first time, an administrative headquarters of the Adventist Church. A few years earlier, the Adventist message had arrived in São Paulo via two colporteurs from the south of the country. They contacted families inside the state and planted the seed of the gospel there, which quickly spread. Years later, in 1906, the first administrative headquarters of the Adventist Church in the state was established in the city of Rio Claro: the Paulista Mission.

From mission to conference

Where the city of Santo André is today, in the past it was the São Bernardo station. The Brazilian publishing house was established there in 1909. Years later, the Paulista Mission was established in the same location, closer to the capital. In 1922, with 750 members and five local churches, the church took another step: becoming the Paulista Association, headquartered in Mooca, a traditional neighborhood in the eastern region of the capital.

Over time, the Paulista Association changed its address, passing through the central region of São Paulo and settling permanently in Brooklin, a strategic location at the time, near the tram that connected the city center to Santo Amaro, where the largest church in the city is located. was located. The rapid growth in membership and churches led to division of the headquarters to multiply the work and its reach.

In 100 years, four major divisions took place, giving rise to other administrative seats in the eastern and southern areas of the capital, the metropolitan area and the countryside. The name also underwent changes, and in 1992 the headquarters that remained in Brooklyn was renamed Associação Paulista. Through it were generated the other seven state seats, which together form the Brazilian Central Union.