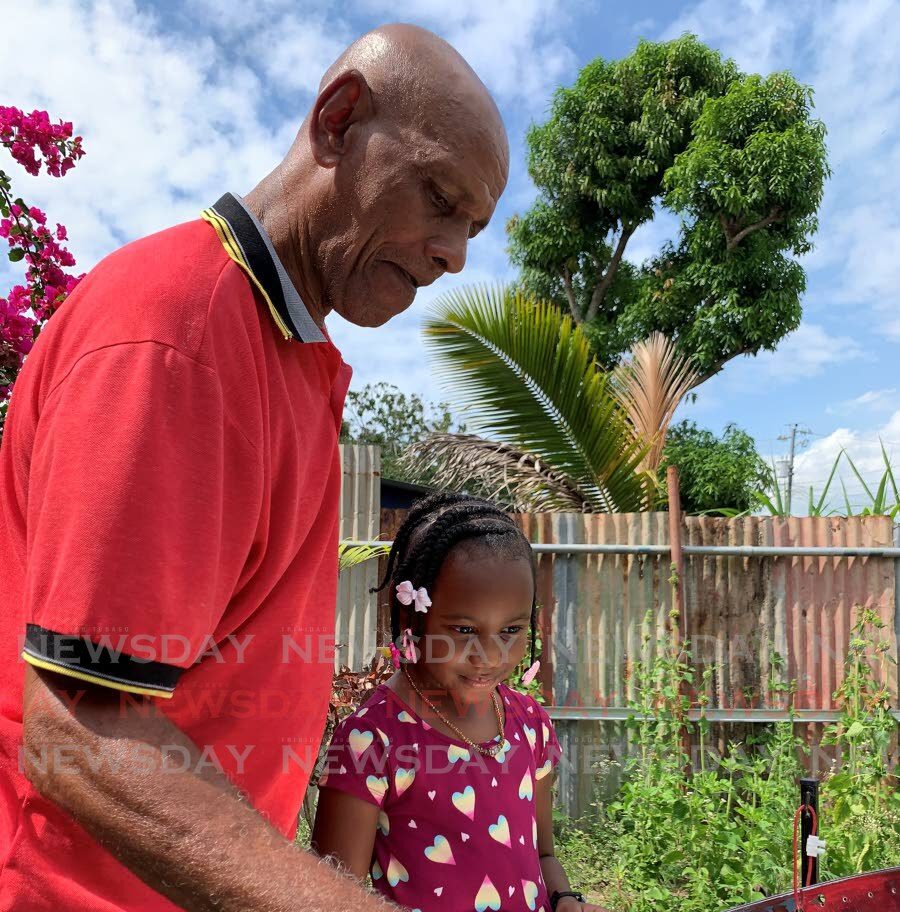 Before the covid19 pandemic hit this country, seven-year-old Aaliyah Livingston was mesmerized watching her grandfather teach her “older” classmates how to play the steelpan.

But being in the early years department at Couva Anglican Primary School meant she was too young to be part of the school’s steelpan band.

One day in April 2020, and out of the blue, Aaliyah told her grandfather David “Pin” Sylvester, 76, a pan lover, that she wanted to learn to play the national instrument. His first lesson began the same day on a tenor pan at the family home at Basta Hall in Couva.

Since then, she has practiced non-stop, sometimes alone and sometimes with her beloved grandfather, whom she affectionately calls Papa.

“When I’m at home doing nothing, I train. Now that I’m in level one, I can join the (school) group,” she enthused.

“When I watched them (the students training), I always wanted to be like them. I’ll stick to the pan, but I also like to dance and sing.”

Aaliyah recalled that her first practice song was the ABC song, followed by the Fish song, another nursery rhyme. At the time, she only played with her right hand. After some more practice, she started using both hands.

Last year, after months of practice, she performed at the school’s talent show.

“It was on Zoom. Sunday (February 13) I played All to Jesus, I Surrender on pan at St Andrew’s Anglican Church,” she recalled.

“I was a little scared, but dad just told me to start playing. I started playing and I didn’t look at anyone. I just played and had fun. It was the first time I performed (in person) in front of people (other than family).”

Aaliyah is looking forward to more performances now that she has had a taste of performing on stage in front of a live audience.

She even offered advice for people who might be afraid to perform in front of a live audience.

“Don’t be shy when you have to perform in front of people. Just study what you’re doing. When you’re done, you (have) had fun. You’d be like, ‘I want to do this again.'”

Steelpan’s music seems to run through his veins. His grandfather is a legend in the steelband fraternity. Sylvester co-founded NGC Couva Joylanders and has performed with several bands over the years. Some of them were BP Renegades Steel Orchestra, Tokyo Steel Orchestra and Caribbean Airlines Skiffle Steel Orchestra (formerly known as Skiffle Bunch).

For the past few years, the grandfather of six has volunteered to teach pan at the Anglican primary school in Couva. He led the school to several finals of the Junior National Panorama competition.

He also volunteers at Holy Faith Convent in Couva, where another grandchild attends.

“Aaliyah loves pan, so it was no problem for her to learn quickly. She always hears pan music at home. She also watches my daughter Danica Livingston, who plays Hadco Phase II Pan Groove,” Sylvester said.

“Aaliyah loves to draw, dance and sing. She’s an all-round student. Nadia (Aaliyah’s nine-year-old sister) loves to dance but isn’t as keen on pan as Aaliyah.”

Sylvester said he was happy to teach Aaliyah and all her other students and parents who want to learn how to play the pan.