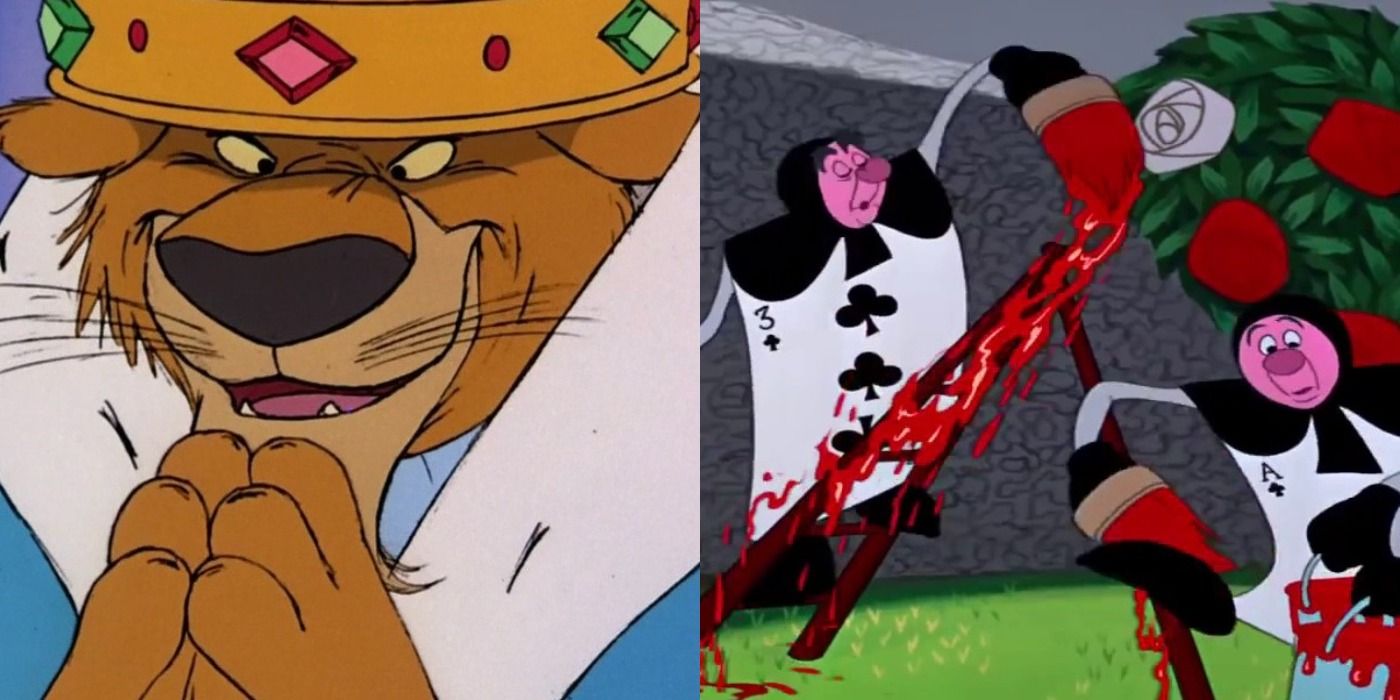 In many Disney musicals, the villain song is arguably the crowd’s favorite number, and Disney has had a slew of sinister hits. ‘Be Prepared’, ‘Hellfire’ and ‘Poor Unfortunate Souls’ are just a few of the legions of devilish tunes the studio has created, much to the delight of fans.

But while Scar, Frollo, and Ursula are all recognizable voices behind those terrifying tunes, some villainous numbers require no character involvement. Shocking as it may seem, there are a few very popular Disney villain songs that are more about the villain than anything that would be sung by them. Reputation is part of the territory, after all.

Arguably harking back to one of Disney’s earliest villain songs before Disney villains achieved notoriety, “Who’s Afraid of the Big Bad Wolf” sung by the Three Little Pigs is one of Disney’s earliest tunes. the most memorable, but concerns a notorious character. While it’s essentially their way of poking fun at the titular predator, it’s still one of the studio’s most eye-catching compositions.

It’s hard to imagine how many people sang the question, “Who’s Afraid of the Big Bad Wolf,” but it’s probably one of the happiest songs about a murderous wolf created by the Walt Disney Company.

The Muses’ renditions of “The Gospel Truth” might be mostly about Hercules and the Olympians, but the movie’s Greek chorus would be remiss if they didn’t give some background information about the movie’s villain. After all, he is as much a part of the story as Herc himself.

Right from the key change in the “He ruled the underworld…” verse, it’s clear the song takes on a much meaner tone as the muses describe just how wicked Hades can be. While a song from Lord of the Dead would be just as entertaining and somber, the Muses keeps the storytelling momentum going with its portion of “The Gospel Truth.”

The bagpipes aren’t normally the most intimidating instrument in the orchestra, but the “Song of Mor’du” gets pretty weird and dark for something Pixar. While the gigantic cursed bear isn’t the most extreme villain in Disney canon, his reputation sung by King Fergus and his clan of Scottish warriors is certainly nightmarish.

Taking a page from Captain Ahab, King Fergus swears a strong vendetta against the bear that ate his leg, a sentiment only solidified with this song. With lyrics about beheadings, loss of limbs and the eating of children, Mor’du is described as one of the most fearsome creatures in all of Scotland.

We don’t talk about Bruno (Encanto)

Not since “Let It Go” has a Disney song been so quickly etched into the public consciousness. Even if Bruno is not really Encantois a villain, the way he’s portrayed in the family verses certainly paints him as a pretty sleazy wizard.

RELATED: 10 Disney Villain Deaths They Could Have Survived

“He sees your dreams and delights in your screams” is a scary enough phrase without “rats on his back”. Despite having a flair for Latin samba, Bruno is all but lowered to Voldemort’s level of infamy by members of his own family. That being said, it is still perhaps the most beloved song from the film.

Some of the best villain songs are those that poke fun at the character in question. For example, “The Phony King of England” from Disney’s animated adaptation of Robin Hood. Prince John is already the perfect comedic villain, giving him a song that gives him a sense of dignity would completely take away what makes his personality memorable.

While it’s certainly not one of the most well-known villain numbers, there’s hardly a verse that isn’t true. Prince John is simply a spoiled brat who has gained a lot of power, and the song brilliantly reflects that with extremely comedic effect.

It might be a catchy tune, but that song from The Queen’s Hedge Maze Card Game isn’t just a gardening mistake. As they literally “paint the roses red,” the verses describe the extremes the Queen of Hearts will go to when she finds out what happened to her flower garden.

A song about avoiding execution isn’t exactly the first thing that comes to mind when someone hears the name “Disney,” but it was for their adaptation of Alice in Wonderland. The source material was already dark and eerie, to begin with Disney only provided music and lyrics.

The Backson (Winnie the Pooh)

There’s a saying that goes “the devil you know is surer than the devil you don’t know”, and a good example of this is how Pooh and the crew of Hundred Acre discuss the infamous Backson . Due to a miscommunication, Pooh and his friends mistakenly believe that Christopher Robin has been captured by a giant monster.

Although the actual Backson is far from what most would consider scary, imagination is a powerful thing. As the friends guess and imagine what a beast like the Backson might look like, he’s still as scary as their minds let him be.

Heffalumps and Woozles (The Many Adventures of Winnie the Pooh)

the Winnie the Pooh The series isn’t one that requires a villain, but if that role should fall to anyone, it would be the Heffalumps and the Woozles. While their existence is debatable based on the Pooh movie they’re featured in, they’re still given a classic Disney song with psychedelic imagery.

RELATED: 10 Disney Villains And A Quote That Perfectly Sums Up Their Personalities

Sung by the disembodied voices of floating Hunny Pots, it warns of the evils of honey-hungry Heffalumps and cunning Woozles who prowl in search of sweet treats. Certainly weirder than scary, but anything after his honeymoon would terrify Winnie the Pooh.

It may be one of the most famous Disney Villain songs in the studio’s library, but it’s not sung by its namesake. “Cruella De Vil” is written by Roger as he tries to find the lyrics to his new song. Briefly meeting the outrageous Cruella proved to be more than enough inspiration that culminated in this jazz standard.

Similar to songs such as “Bad Bad Leroy Brown” and “Mack the Knife”, it’s simply a song about how mean and mean Cruella can be. While Roger’s words are exacerbated to some extent, anyone who wants to make a coat out of Dalmatian puppies is pretty evil.

NEXT: 10 Disney Animated Villains, Ranked By Their Evil Laughs